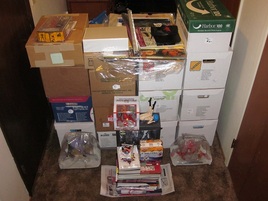 The entire collection as of September 15, 2012.
I have been a fan of Evangelion since at least 1995. The first I ever saw of the series that I remember is a fansub of Episode 1 and Shinji falling flat on his face the first time he got into Eva-01. The rest is history. I have been a collector as well since at least that time.

The idea for this website goes back a few years. Previously my collection had been indexed in Word but in text boxes and was not as systematically organized or categorized. In the process of inventorying everything beginning in August 2012 I decided that now was a good time to start on the virtual museum that had been germinating in my mind.

What you see on display is the work of collecting Evangelion going back to at least 1995, at a time when I was still in high school and was thus unable to acquire much of what was being released at the time. Fortunately since then what I have been dreaming about from the pages of E-Mono to have in my collection is now in the museum. Also since then, the tide of Eva merchandising has not stopped, but turned into a veritable tsunami with the release of Rebuild. Rather than attempt to be the Steve Sansweet of Evangelion, which is very hard to do for someone who doesn't live in Japan and isn't positioned to pay an arm and a leg for shipping to try and keep up with the previously mentioned tsunami, I decided to instead focus on what I like and not worry about other things that are on the high end, am just not as interested in, or are not practical at this time (e.g. figures due to their bulk).